The greatest opposition formed so far has been the shock that no tree preservation plan was written before architectural planning. So, after designs are drawn, we discover that we lose the Moon Tree and many others. The Historic State Capitol Commission begged Mr. Cooley to continue the Capitol Park Master Plan underway when he began the Annex project, but he declined. It could have spared these surprises. The Tribal Communities have been saying the same objections from six months, where is the consultation with them the law requires?

THE SOLUTION: Release to the public the current categorization of trees in the project footprint as proposed in the September 9, 2020, update. We know the Project Planners have categorized every tree in terms of whether or not it will be removed if the project moves head. Complete and release to the public a Tree Preservation Plan. Move parking out of Capitol Park, use the basement of the existing Historic Capitol Annex for a Visitor Center and hearing rooms.

We at Public Accountability agree that the code, handicapped access, and safety issues of the Historic Capitol Annex are urgent, and its mechanical and electrical systems are at the end of their life. The Legislature has kicked these needed upgrades down the road for decades. DGS even made a plan to correct them in 2005 and started the HVAC upgrades. But instead of asking a historical preservation expert, “How do I meet the Legislature’s needs by renovating the Historic Capitol Annex which is on the National Register of Historic Places,” Mr. Cooley issued an RFQ for the demolition project. It violates the law to not do a proper study of renovation ahead of making the demolition decision. The project has not yet been submitted to your State Historic Preservation Officer. Why not?

THE SOLUTION: The Legislature’s move to the Swing Space building at 11th and O Streets provides a safe space for Legislators, Executive, and staff to work while the following remedies are completed. Perform the statutorily required exploration of moving cars out of the Annex basement off-site, use the basement space for a Visitor Center and Hearing Rooms. Perform the overdue upgrades for code issues, handicapped access, and deferred system replacements. This will save tens, perhaps hundreds, of millions of dollars for urgent statewide efforts to respond to wildfire, pandemic, and economic crises.

The absolute minimum of public transparency has been given this project. Surprise awaits us at every hearing. Our request for planning documents under the Legislative Open Records Act was answered with a long list of exemptions under which the Legislature is entitled to not share documents. Legal? Perhaps. The right thing to do? We think not.

THE SOLUTION: Release all reports that have been withheld from the public, redacting legitimate security information. End the existing Capitol Annex Project. Re-frame the Project with the limited goals outlined above. Make all future planning transparent and open to the public.

Use the “Swing Space” at 10th and O Streets to indefinitely house legislators/ legislative staff.

Preserve the lawn in front of the West Wing of the Capitol—the “People’s Porch”—for public gatherings and celebrations.

Adaptively reuse the existing Capitol Annex pursuant to appropriate safety, accessibility, and historic standards so that—if a Visitor’s Center is desired—the Annex can function as one, with additional room to house substantial on-site executive and legislative leadership offices and hearing rooms.

Cost Savings - The estimated cost of the Capitol Annex Project is $755,578,904 per a Joint Rules Commission Informational Hearing held on August 13, 2019. - The “Swing Space” is already being built; plans for temporary legislative offices have already been made. - This alternative would significantly reduce the estimated $755 million above—plus eliminate the additional time, energy, and resources that would be spent moving legislators/legislative staff multiple times.

Cultural and Historic Resources Benefits - Rehabilitates and restores the integrity and functionality of the Historic Capitol Annex through thoughtfully planned improvements in conjunction with historic standards. Retains and reuses rare/expensive materials and art elements. - Preserves the integrity of Historic Capitol Park and stops the loss of its heritage trees; no digging for a parking structure or Visitor’s Center needed. - No further disruption of Tribal Community Cultural Resources.

The underground parking garage proposed in the September 9, 2020, update is situated near the Civil War Grove trees and has arguably minimal protection from terrorist car or truck bombing as it sits next to the proposed new basement hearing rooms. If we shouldn’t buy gasoline cars by 2035, why even build a parking garage to last 50 years?

Capitol Park is NOT a building site. Security experts advise against allowing any vehicle under important public buildings, so to eliminate Legislator Paring under the East Annex, here are some options. They include property already owned by the State, empty lots, or parking garages which could be purchased or leased. 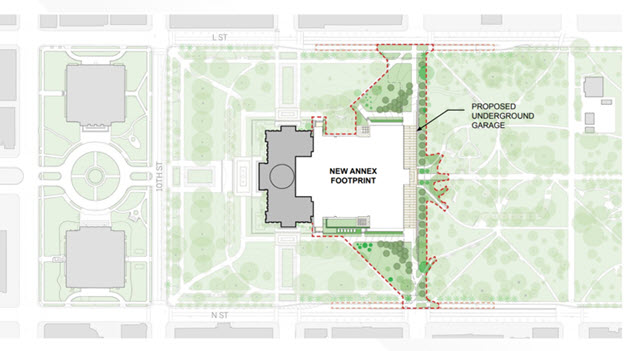 Public Accountability for our Capitol